Calculating The Depth Of Foundations For Single Storey Extensions 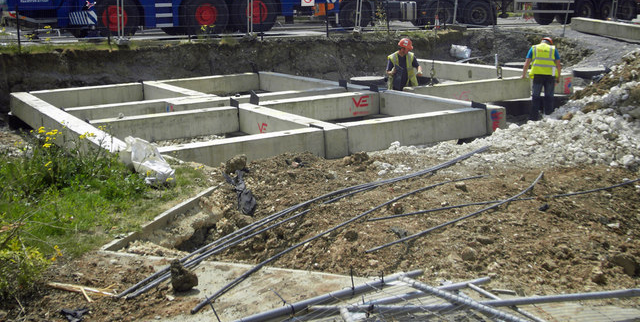 The foundations for your much-anticipated brand new kitchen, dining or bedroom extension may not be visible to the naked eye, but their importance cannot be over-stated. And yet, when it comes to working out how deep foundations for a single storey extension need to be, there is no ‘one size fits all’ answer.

Government and architectural guidance exists, of course, but it’s commonly acknowledged that the depth for low-rise domestic or commercial extensions will vary because so many other determining factors come into play. These include:

How Soil Types Can Affect Depth

Different soils react to factors such as heavy rain or a summer of drought in different ways. Foundations using clay soils, for instance, have to be built deeper since the clay can expand or contract between 0.75m to 0.9m with prolonged atmosphere changes. With sand, chalk and other types of soil susceptible to frost then it’s necessary to dig below the level at which frost can affect the foundations (usually a minimum of 450mm).

The Damaging Effects Of Garden Trees

Trees cause the ground around them to shrink because they suck moisture from it. This radius can be much larger than most people assume. We’re not advocating you get rid of the tree but rather include this in the calculations for the depth of the extension’s foundation.

When it comes to using clay soil, however, a nearby tree could prove particularly problematic since this type of soil tends to shrink more than others. It’s also worth noting that if the tree is chopped down the root system underground will remain and moisture from it will seep into the soil over time. This could result in the opposite problem; i.e. the ground swelling and damaging the foundations of your new extension.

Why It’s Important Not To Dismiss Nearby Drains

The weight of a new single storey extension doesn’t just bear directly downwards. Instead, it tends to spread out at a radius of around 45 degrees or more. This means that any drains in the vicinity could be affected and damaged. For this reason the foundations of the extension should match the depth of the drains.

A backfilled area in where the ground has already been ‘tampered with’ e.g. a drain has been installed there and instead of there being ‘virgin’ soil it has been mixed with other types.

Preparing the foundations for an extension on a former landfill site require special treatment such as the need for a ‘raft’ foundation. This involves the use of thick, reinforced floor slabs.

Most architectural designers and structural engineers today agree that it’s a far better idea to work out how deep foundations for a single storey extension need to be prior to the building inspector turning up on the day. Otherwise there is a high potential risk of delay or dispute – the very last thing you want on the first day of your new build.

At BDS we can take care of the whole extension building process for you, from designing your extension to planning your foundations and project managing your build. For more information on single or two storey extensions download our free eBook The Ultimate Guide To Expanding Your Living Space today. You can also chat to one of our designers about your plans by calling us on 01332 830313.